It was almost two years ago, when I was asked by our producers, the Stavros Niarchos Foundation Cultural Center in Athens, which author’s play I would like to direct for them. I routinely said I needed a few days to think about it.

In reality, I already knew from the first moment: the times called for, better said demanded, Jon Fosse.

It’s difficult to put it down in words, but the feeling is overwhelming. The pandemic and all its dire consequences which have been afflicting us for more than eighteen months now was then still nowhere in sight, but the apocalyptic dimension of the era we are living in was already distinctly palpable. And the pandemic is -to my mind- only the tip of the iceberg. A sensitive receiver will clearly recognize the signals: the climate crisis, the mega fires erupting all over the world, even in the Poles, the climaxing food crisis in the third world, the global waste crisis, the slow death of the oceans, the recent Afghan crisis, plus plus plus…

Two people, a man and a woman, seek refuge from everyone and everything. They want to isolate themselves as far away as possible and be alone with each other, alone in each other. Once a romantic utopia, seen in today’s light, the enticing dream becomes a deep existential necessity, that quickly turns into a bleak nightmare. And where the third person in those days would only spice up the couple’s ennui and trigger off a dangerous yet seductive game among them all, in today’s world he brings along a threat of devastating proportions. In my mind, anyway.

But Fosse is Fosse. There will be no fireworks or Wagner. But there will be innuendos. And riddles. There will even be humor. Yet this is exactly what makes this author so alive, so present, so explosive. And so contemporary. A few words ingeniously and endlessly recycled, prophetically describe the world. Then. Now. Always. Inside us. Outside us. Everywhere.

And then, to make the whole idea even more tragi-comic, the corona-virus pandemic arrived.

We started rehearsals in Athens in early March 2020, when the Covid-19 situation was already a global threat, but we couldn’t yet conceive the dimensions it was about to take. Next came the first lockdown in Greece, and we had to stop the rehearsals. Temporarily, we thought. And then chaos ensued. In Greece, in Norway, all over.

We cancelled the first opening in Athens in May 2021, and -believing we were being pessimistic and cautious enough- we set the new dates for a whole year later, May 2021. Meanwhile the Fosse Festival had given us a preliminary invitation pending a visit by the Festival curators and directors to see the performance in Athens. So we decided to turn optimistic and to go ahead and start rehearsals again in March 2021 -and this time complete them no matter what. And we did! But the situation -as we all know- got worse and worse, the virus was -and still is, I am afraid- always one step ahead of us, so we had to postpone the opening in Athens once again. This time for September 2021. But the Festival was set for early September, there was no way we could manage to open in Athens first. (So complicated, I know!…) Which means there were two options for us and for the Festival. Cancel the performances in Oslo altogether, or scrap the protocol, and take the risk: for the Festival it would mean to go to a blind date with a Greek, and for us to open first in Oslo without any prior performances anywhere.

But miracles do happen, even in the Covid-19 era.

And here we are, ladies and gentlemen. We took the risk. We hope it will not be at your expense! (Just joking…)

Yannis Houvardas has already directed two other plays by Jon Fosse: “Vakkert” (2004) and “Dødsvariasjonar” (2013). He considers his actors and team for “Nokon kjem til å kome” ideal for the play. And is very happy to return as a director to Oslo after nine years and to the Norwegian Theater after more than three decades. 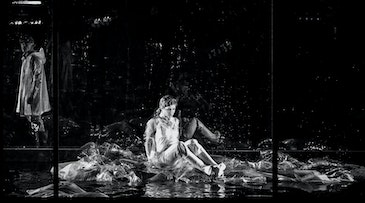