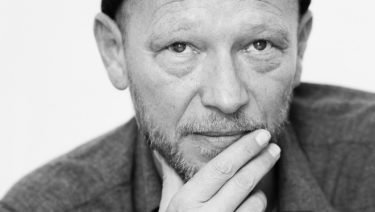 – It is a wonderful view to wake up to.

For Perceval wakes up to this every single morning now during the stage rehearsals for the Trilogy. He is living on board m/s Ilonda, moored at Aker Brygge, from April to September. Ilonda is so large that it may be more natural to call her a ship, rather than a boat. Perceval himself calls Ilonda an old lady:

– That’s because you have to treat her gently. Things fall apart all the time, there’s always something

that’s broken. When we sailed up here, we almost sunk. She took on a lot of water, and the pumping system broke down. In that kind of situation you just have to act, and not allow panic to consume you. Life on a boat keeps you calm, but alert.

Of course, it is quite becoming for a director of the Trilogy to live in a boat: In Jon Fosse’s masterpiece about Asle and Alida, the boat journey plays a central part. The dramatic months in Bjørgvin, where their son Sigvald is born and Asle perishes, start and end on a boat. Bjørgvin, Western Norway, with its ragged coastline and ever-present sea, is the backdrop of the story. Scenographer Annette Kurz also used boats as her starting point when she created the scenography for the play.

Boats have been part of Perceval’s life for as long as he can remember. His parents were skippers, he has been living on a boat for much of his life. He talks about how he was terrified of water, and nearly drowned on several occasions. His grandfather perished at sea, a death shrouded in mystery and missing jigsaw pieces. As a boy he longed for the mainland, longed to be with other children, play football or just to have solid ground beneath his feet. Now that he is older, things are different.

– All of a sudden it felt right to own a boat, to stay on a boat as much as I could. I suppose that’s one of those repetitions that I feel life is all about. You repeat your own life, and the life of your parents, and they in turn repeat themselves and their own parents.

Everyone who is familiar with Fosse knows how repetitions, both linguistic and thematic, are recurrent in his literary works. Those repetitions are easy to find in the Trilogy, too. Although this novel in three parts is a kind of criminal mystery, it is also a genealogical novel; a tale over three generations, where the choices made by one generation are repeated by the next. It was because of these repetitions that Perceval felt that he simply had to do the trilogy.

– I had done Dream of Autumn in Munich, and was quite familiar with Fosse’s work. But upon reading the Trilogy, I instantly felt a strong kinship between my own life and Fosse’s text. The repetitions seem inevitable; it is as if the more you move into the future, the more you are dragged back in the past. You think that now I’m doing something new, but really you are doing the same things over and over.

In Perceval’s dramatisation of Fosse’s novel, he has chosen Ales, Alida’s daughter and the main character of the last novel, Weariness, as a central storytelling character. Here, it is Ales who unravels the tale about Alida and Asle, trying to assemble the jigsaw pieces of her own life and the lives that were lived before she was born.

– She does it to become free, trying to find out why her mother died; what really happened. I believe many people have these kinds of black spots in their family history; persons or places that you don’t talk about, as they conceal a darkness. At the same time it might often be those missing jigsaw pieces that actually hold the key to being able to see the whole picture of how a family understands itself through the generations.

Ales being a kind of narrator and the fact that the story on the stage is narrated through her is a way of creating a perspective which is different from what we have when reading the book. Yet it also adds an extra dimension to the story, says Perceval.

- We are inside her head, inside her mind. We follow the paths, exits and blind alleys of her mental labyrinth.

Illonda sways slowly back and forth. The maritime idyll and the bottomless darkness of the sea go hand in hand for Perceval.

– Sometimes I, too, feel like Ales in a way; mulling over the hows and whys, repeating myself: this is how it was; no, it was like this; again and again, lying here in my wooden coffin trying to fall asleep at night.